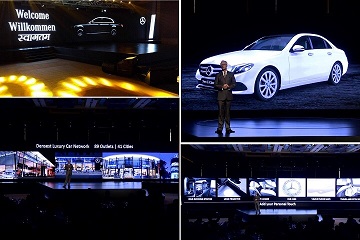 For Mercedes this launch was serious business. The intent was to mesmerize the media, dealers and live viewers through a never before seen amalgamation of technology and content. More than the structural features of the car, the challenge was to highlight the car’s internal features. To live up to the expectations, we created an unforgettable content on digital media before the car was unveiled.

The launch of Mercedes E-Class was different from regular launches since the positioning of the car in the minds of media and consumers was more on ‘Intelligence’ than anything else. A complex concept such as ‘Intelligence’ was a challenge to depict experientially. However, taking intelligence as our theme, we created a technology and data-fuelled launch content through Animation and Mapping!

We created the E-class in 3D Animation to showcase its 'Intelligence’ before the unveiling: A difficult, yet exciting creation since even a millimetre variance could alter the car model that was to be revealed minutes later.

Through the ‘Mercedes Dialogue’ concept, journalists were given full access to all aspects of the event, allowing them to become brand advocates by knowing and seeing the truth behind the technology firsthand.

An elegant and simple setting of the venue created the perfect environment for the launch that took place by complete lateral movement of 80 feet of LED.

The ‘Intelligent’ digital content, along with the media dialogues mapped the exact positioning of the car in the minds of 250 media and 6,500,000 viewers: creating its competitive distinctiveness!

For the entire 30 minutes of the launch, the audience was mesmerized by the dynamic virtual car presentation that highlighted some of the features like the right-hand-drive version of the new E-Class, Air Body Control, 37-degree recliner rear seats and 22 other features. All this came alive on an 80’ X 15’ curved LED screen that was set up for a stunning, note-perfect 3D content presentation delivery.

To create the content, we spent over 720 man-hours across 400 computers for rendering 11,986 X 1080 pixels of the virtual E-Class, to create perfectly harmonized Mapped Animations that revealed the car. All the guests were treated to an incredible launch show followed by an amazing high-velocity car reveal.